Next5 Tips on How To Network Effectively
Students

When the first crop is harvested in the Project Growing North greenhouse in Naujaat, Nunavut this spring, no one will be cheering louder than Stefany Nieto.

Nieto, a fourth-year student at the Ted Rogers School of Management, is the co-project manager, along with fellow TRSM student Ben Canning, of Project Growing North, an Enactus Ryerson initiative that has raised funds and provided labour to build a greenhouse that will provide fresh vegetables to this isolated northern community at a reasonable cost. The greenhouse was finished this month and planting will begin in March.

“It’s an amazing feeling to see something we’ve been working so hard on for the past few years actually come to life,” Nieto said.

Project Growing North addresses both food insecurity and health issues for the people in the Hudson Bay hamlet of Naujaat, population 1,000. Generally, residents of Northern communities pay an average of four times the price that Ontarians pay for vegetables and herbs. Given the frigid temperatures much of the year, Naujaat residents have been unable to grow their own produce – until now. 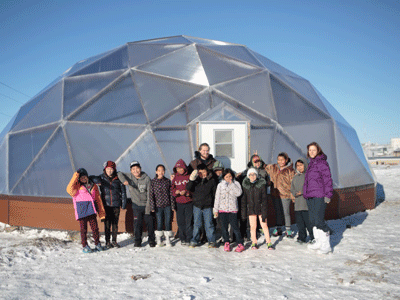 Ben Canning poses with students from the local community in front of the completed greenhouse.

The idea of a greenhouse was conceived through consultations with local residents, and Nieto says the only way such a project can be sustainable “is if the community embraces it.”

Naujaat’s residents are “super-excited,” she added, and a lot of people in town are eager to be involved.

She and Canning recently hired a local woman to manage the greenhouse and are seeking a government grant to provide her salary.

“We’ve come this far, so I have trust in our team to find something,” Nieto said.

Nieto herself spent a month in Naujaat this summer, helping to teach the residents about community planting, growing crops, maintaining the greenhouse and running a business. Canning and a few other Project Growing North team members followed her and helped to build the greenhouse itself. The first harvest is expected in April.

“We hope to work with other communities and expand Project Growing North in 2016,” Nieto said. “It all depends on finding partners, funding and a community that is willing.”

Nieto said involvement in a major project such as Project Growing North offers a myriad of lessons to the students involved. The most important, she said, were learning how to make pitches to funders; building relationships with the community and other key partners; and teamwork. Two other students who were instrumental to the Project Growing North team are Christian D’Antonio, a fifth-year economics student, and Savreen Gosal, a second-year law and business student.

“We’re all looking forward to the harvest,” Nieto said.

Ben Canning and Savreen Gosal recently appeared on Canada AM to talk about Project Growing North. Check out the video here!