TRSM on Canada AM: My First Appearance on National TV

My name is Savreen Gosal and I’m a Business Management student at TRSM and proud member of Enactus Ryerson. Enactus is an organization run by students who are dedicated to creating positive change in society. Enactus has changed my life, and I am exceptionally proud of the exposure we have received for our efforts, including my recent appearance on CTV’s Canada AM.

One of our most important initiatives is Growing North, a project created to help alleviate the current food crisis in Northern Canada. Currently, Northern Canadians are paying up to four times more for their food than the rest of Canada due to extreme shipping costs. Our Enactus team recognized an opportunity to help with this situation and came up with a plan to build a geodesic greenhouse dome so that the community can grow their own local fresh produce without having to bear the high costs of shipping. 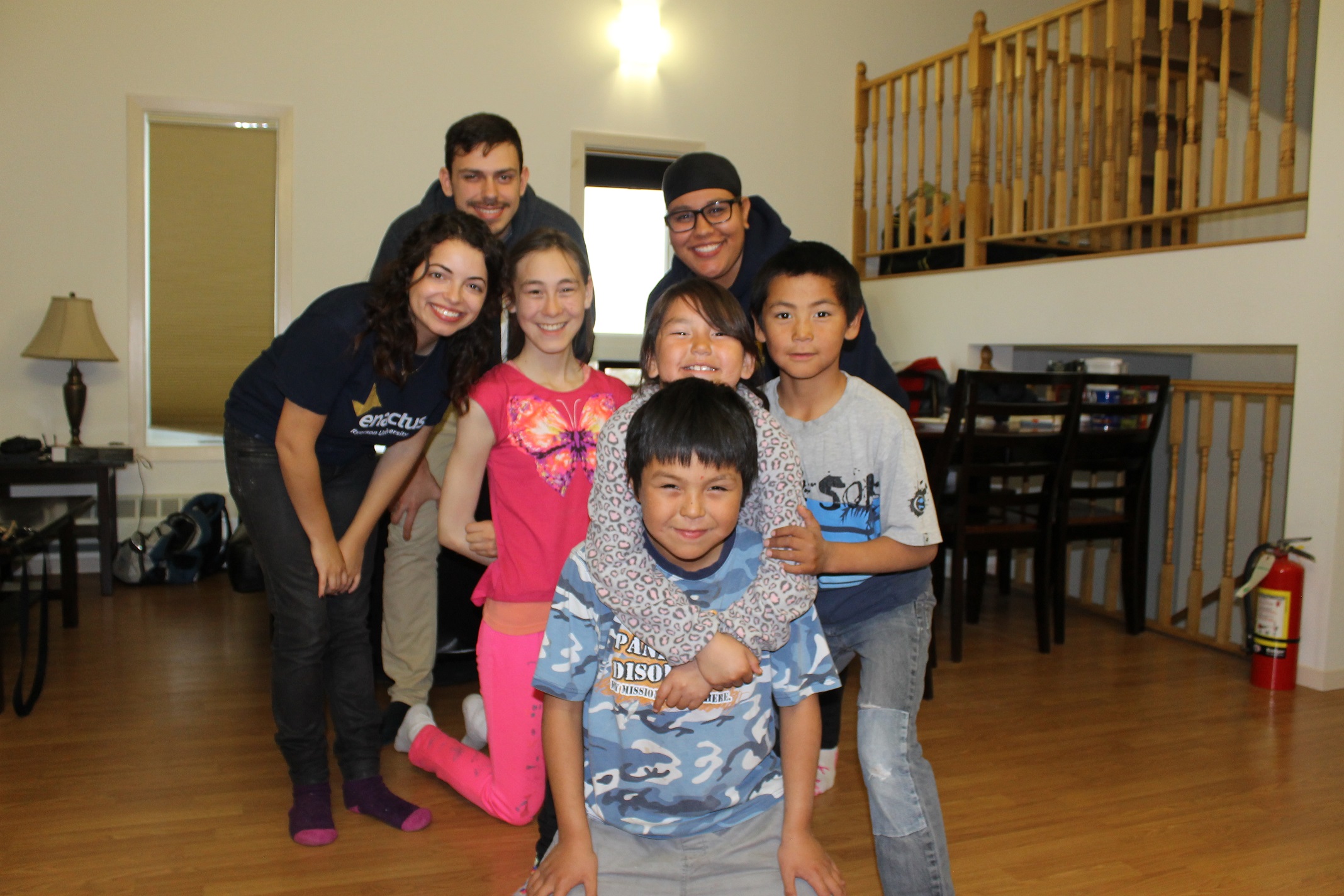 Members of Enactus Ryerson hanging out with children in Naujaat at a special pancake dinner.

This summer our team spent about a month in Naujaat, Nunavut, the pilot community where our project will launch. Last week, I was on CTV’s Canada AM morning show to explain our trip and the success of our project so far. This was my first time on live TV, so I was extremely nervous. Canada AM is broadcast throughout Canada, which is a bit intimidating! I had never been in any atmosphere like it and did not know what to expect. 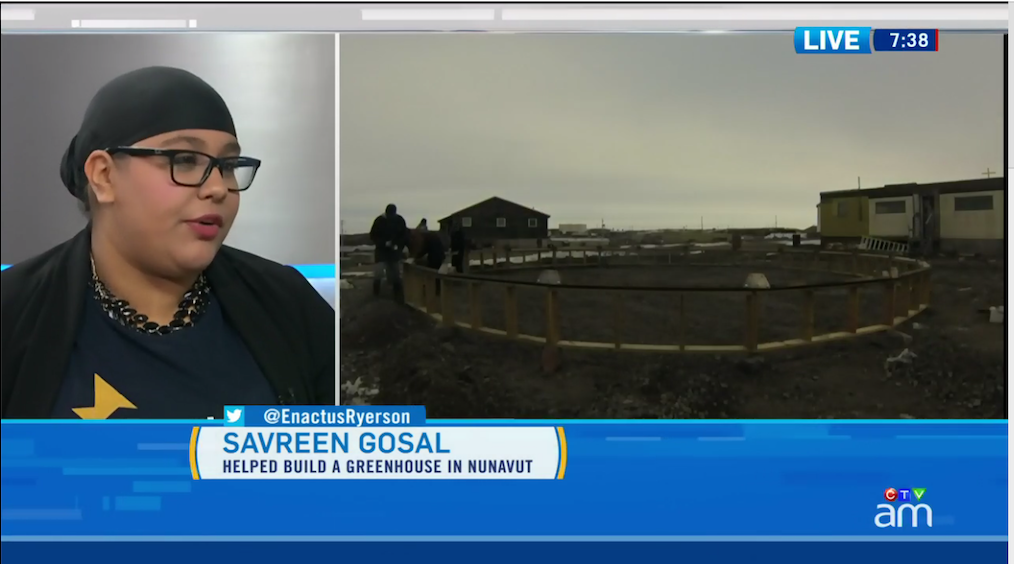 Savreen explaining the build process on Canada AM.

The morning of the show, bright and early, I had to head out to the CTV studios in Scarborough. The producer scheduled a car to pick us up at TRSM at 6:30 a.m. As a commuter, this meant getting on the bus by 5:15! Throughout my commute to the studio, I practised my answers over and over in preparation for the live show.

The CTV studios were fascinating. Even at 7 a.m., the building was buzzing with producers and crew members prepping for the show. We were led into the green room, where we waited with some of the other show’s guests. About 20 minutes before we went on air, the producer took us into the makeup room, which was filled with makeup artists and hair stylists all prepping people for the show. I felt like a celebrity getting my makeup done and for our interview. After we were finished getting “dolled up,” the producer led us to the studio. It was my first time in a TV studio and it was interesting seeing the full set. The producer led us to our seats and the host, Beverly Thomson, joined us. About 10 seconds before we went on air, they started to countdown and then we were live on the air. 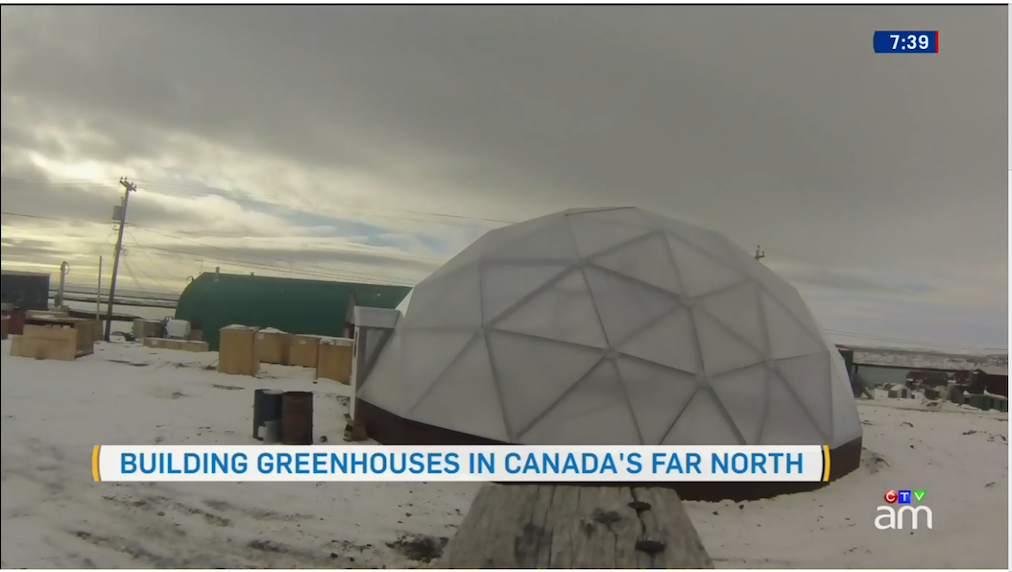 Beverly started by explaining our initiative and our successes so far. As she started asking us questions, I became less nervous and focused on the project itself. Our team is extremely passionate about Project Growing North and I tried my best to showcase our passion through the interview. After just a couple of minutes, the interview was over and we were off the air. I am extremely happy and proud of our team for everything we have accomplished. As we embarked on our journey back to TRSM after the interview, I received countless texts and calls from friends, family and peers who had seen us on the show. They were all extremely pleased and many of them woke up extra early just to watch the interview. Through their support I have been able to continue with this project and help improve this issue. 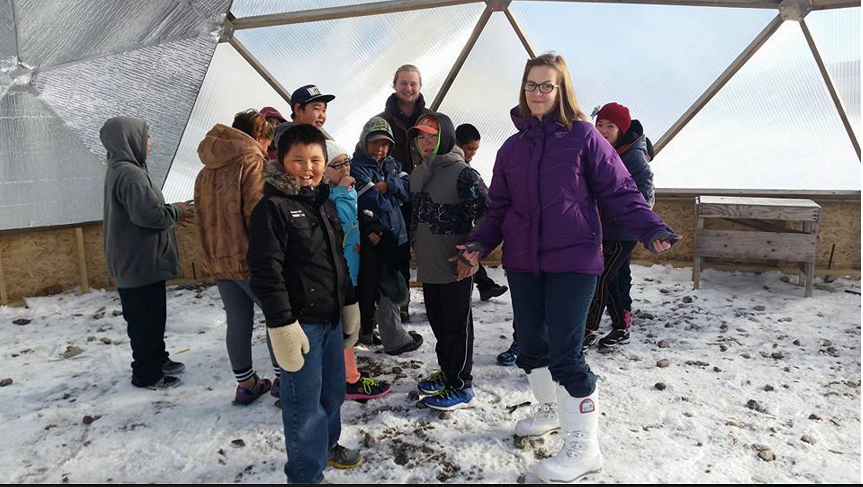 Overall, the interview was a great experience. It has allowed me to gain more confidence as I continue to promote the Growing North project. Our team has worked extremely hard throughout this year raising funds and ensuring that everything was success for our trip. As a national show, Canada AM has made many more Canadians aware of current issues affecting our country. It is still a shock that some Canadians are paying ridiculous amounts for their produce. I am optimistic that this greenhouse will help the residents of Naujaat immensely and allow them to become a self-sufficient community.