Finding Success in Shanghai as a Canadian Expat

As part of Experiential Learning – Asia Pacific Study (RMG 917), a group of 17 TRSM Retail Management students are visiting China for a two-week learning experience exploring the Chinese retail market. The group began their journey in Beijing on Saturday, May 7th.

Here, students Lauren Jaques and Cherry Liu tell us about some of the highlights of their trip to Shanghai, including meeting a former Ryerson professor who has found success in the Chinese market, and visiting the studio of fashion designer Grace Chen. 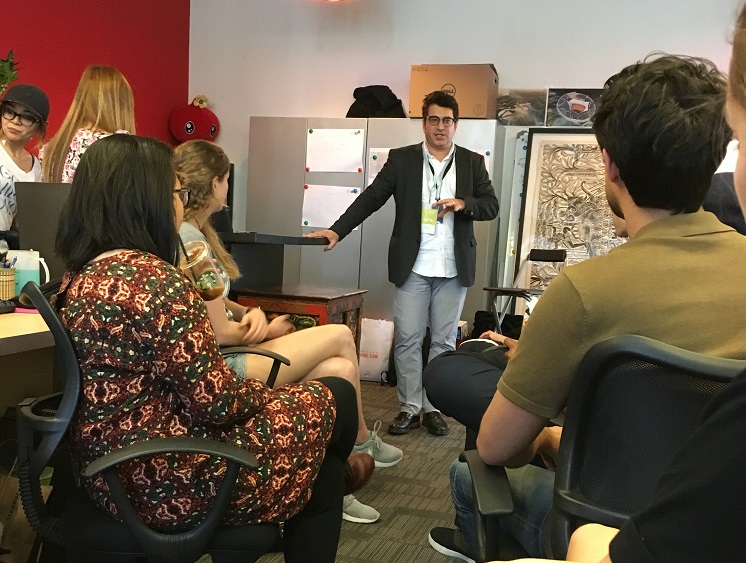 On our second last day in Shanghai, we visited a variety of businesses both large and small. One of the smaller ones included Red Gate International – a Canadian-operated PR and communications company in the heart of Shanghai.

The founder of Red Gate, Mark Ceolin, is a former Ryerson professor who taught for a Chinese university and never returned full-time to Canada after deciding to pursue opportunities in China. He has lived in China for the past 13 years and has definitely made a name for himself and his company. He works with some of the top Fortune 500 companies within China and participates actively in the Canadian community as founder of the Canadian Chamber of Commerce in Shanghai. He provided our group with some insights about working in the retail environment in China, while also “telling it like it is.”

Moving to China wasn’t a big decision for Mark, as he always likes a challenge and “living in the cracks between cultures.” He said, “I don’t like feeling like I have all of the answers all the time.”

The secret to his success working in the Chinese market comes down to engagement at all levels of your life, both professionally and personally. His top three tips for any of us thinking of pursuing a future in the Asia Pacific business world included:

“It’s not about needs or wants, it’s about putting yourself out there and creating relationships” – especially when it comes to looking for business partners and help along the way in a foreign environment.

Today was the first day of our visit to Shanghai. Everyone was excited to explore the most internationalized city in China.

In the morning, we went to the Shanghai Finance University, and received an insightful lecture from professor Meng on the retail market in China. Professor Meng has talked about the online retail market in China, the buying power in China, the significance of mobile usage and its impact on shopping behavior, as well as the electronic payment systems in China. We learned a lot. We also had time to tour around the campus, and the campus was beautiful.

In the afternoon, we visited Grace Chen’s studio, and her flagship store and collections. It was very inspiring. We went to Yu Garden for dinner and shopping at night; and explored the small commodities and street market retail format.