For 10 days this September, I had the opportunity to visit the United Arab Emirates to help build and work on partnerships for this year’s Ryerson Global Innovation Challenge (RGIC).

RGIC provides opportunities for students across all Ryerson faculties to create innovative solutions to social issues across the globe. These opportunities allow students to grow and have life-changing experiences. We are able to learn about local cultures while introducing the culture we have at Ryerson and in Canada to the rest of the world. RGIC has previously made impacts in India and Rwanda and hopes to do the same in the Middle East next year.

My trip began late at night in Abu Dhabi where I was greeted by Osman Hamid (Manager of Student Engagement and Business Development at TRSM). I was immediately intrigued by the view of the city as we landed — full of lights and life. It wasn’t until the second day that I got a real first taste of what Abu Dhabi looks like and feels like in the morning. The temperature was a scorching 40+ degrees — simply stepping out of the hotel causes you to break a sweat! 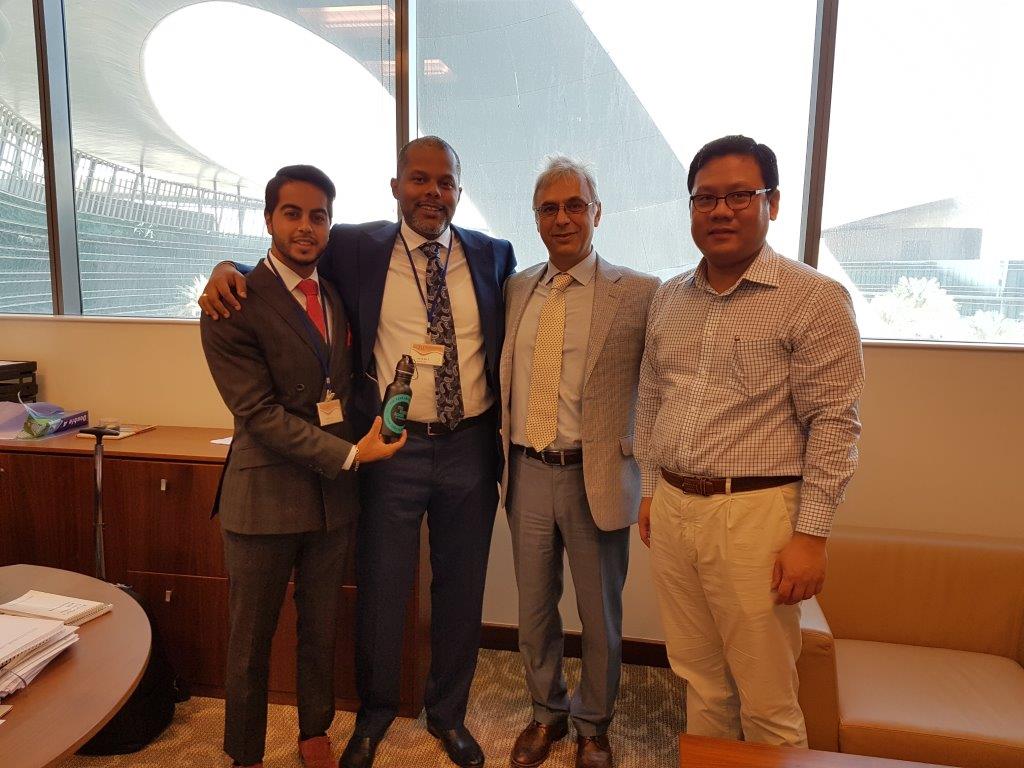 Our first meeting of the trip was at Zayed University where we were meeting the Dean of their Business School – Konstantinos Syriopoulos. We sat with him and told him what RGIC was all about. It was evident from our meeting that the culture in Abu Dhabi is shifting towards entrepreneurship and innovation, which is the perfect fit for RGIC! Kostas was very hospitable and even gave us a long tour of the massive university. We then visited the Alliot Management Consulting group and meet Qaiser Anis, one of the partners at the firm, who gave us a lot of information and insight of what it’s like to do business in Abu Dhabi. Both of the meetings were successful in regards to creating partnerships as well as grasping a deeper knowledge of the culture. 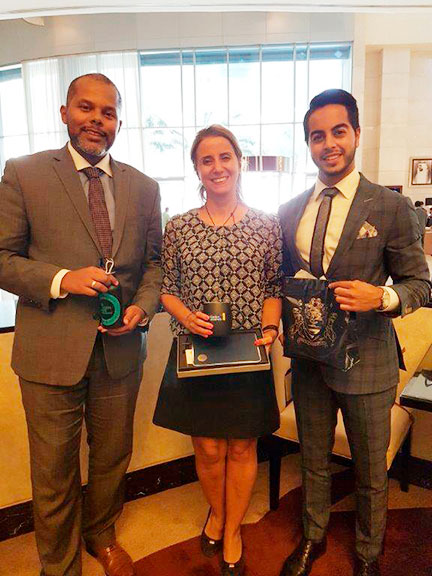 We were up very early the next morning to get ready and prepare for our meeting with Lina Hourani from Al Ahli Holding Group. We met her in the Address Marina Hotel in Dubai. Lina has a lot of experience in CSR and is looking to bring a conference to Ryerson next summer. Her conference is very similar to what we want to do with RGIC in the Middle East, so we figured we can help each other out.

On Wednesday, we drove into Dubai for a meeting with Dubai SME and to attend the Global Innovation Summit. We arrived at Dubai SME and I immediately felt as if I was in a creative thinking space. Everything was so colourful and open. Dubai SME helps give workshops, training, space and funding to start-ups in Dubai.

Once we finished at Dubai SME, we decided to take the transit system to Atlantis hotel on the Palm for the Global Innovation Summit. This took us about an hour and a half to get there however it was a surreal experience. The Dubai transit system really put into perspective how much potential there is for Toronto’s public transit. Our metro ride into the palm was breathtaking. I’ve seen aerial photos of the Palm Islands, but to actually be on them was something else. At the end of the Palm was the Atlantis Resort. This place felt like a city of its own. It took us almost 30 minutes to walk from the front door to the entrance of the summit. The summit was really eye-opening. There were big name C-level professionals on all the panels as well as well-versed individuals as the keynotes. My favourite panel was about Mega-Trends which included the Chief Information Officer at Deloitte Middle East. I was able to ask him a question during the Q&A, but personally don’t feel as if it was well answered. Regardless, the experience was incredible. 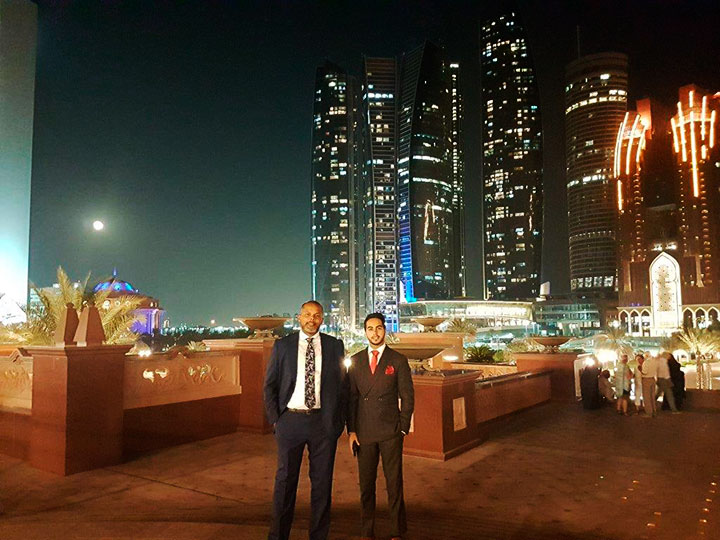 Our final day started with us going to visit the beautiful Grand Mosque. This was such a peaceful spot. We walked around and got to see the architectural design. It was easy to see that not a penny was spared in the construction of this Mosque. We then made our way to Abu Dhabi University where we met the Dean of Business, Jacob Chacko. Jacob seemed very interested in RGIC and immediately told us he would connect us to his entrepreneurship faculty to get the ball rolling. We then made our way over to see Alliot Management Consultants once again. Qaiser was so excited to see us. He was going through some SEO and marketing plans and he allowed me to look over them. I provided him with some small tips and facts of what I believe his next steps should be and after explaining in depth – he completely agreed! 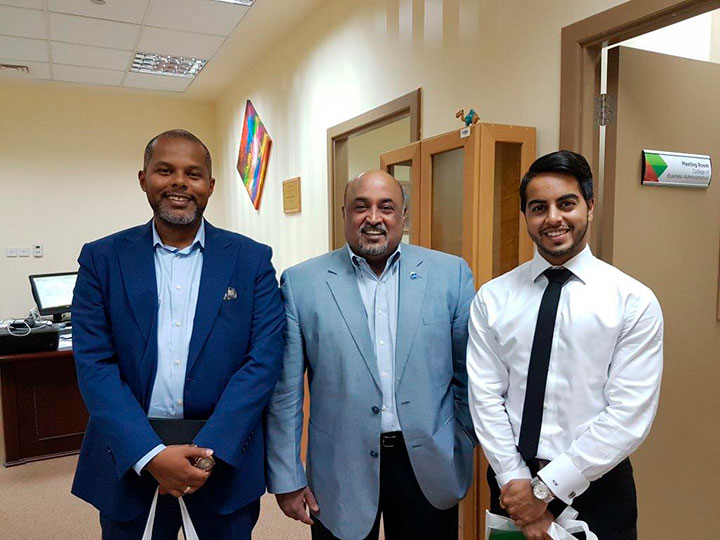 Qaiser was once again very open to hearing our thoughts and actually cared to understand what we were saying. As we now had interest from two universities to partner with, we asked for his advice. After this meeting we made our way to check out the souk. A souk is basically a small market where you are able to bargain on prices.

This trip was absolutely eye-opening and nothing short of unreal. It truly was an experience of a lifetime and I am grateful to have had the opportunity. We had set a goal of ensuring that we would have partnerships in place for RGIC 2017, and this was definitely achieved. I was able to grow both professionally and personally on this trip, and I can vouch that there is nothing like experiential learning.

All-in-all, I would highly advise everyone to take part in RGIC 2017 as it will be an experience you won’t regret.

Want to learn more about the Ryerson Global Innovation Challenge?

Nav Marwah is President of the Ted Rogers' Student Society (TRSS). He is in his 4th year, pursuing a double major in Marketing and Entrepreneurship. He has been actively involved throughout his time at Ted Rogers School of Management. Between being a BUS100 Lead facilitator to being apart of the executive team for the Ted Rogers Management Conference, Nav is always looking for ways to enhance the experience for students at Ryerson. He hopes to continue this throughout his term as President of TRSS.