My journey to the Ted Rogers School of Management is a little more complicated than the average student’s.

After thoroughly researching where to continue my education, I decided to pursue a Bachelor of Commerce degree at the TRSM, majoring in Economics and Management Science (EMS) and minoring in Finance.

In my second year at TRSM, I had the vision of establishing a society to encourage and honour student academic achievements. When I spoke with other recipients of the Excellence Scholarship, which rewards the high academic achievement of EMS students, they felt there was a lack of networking and internship opportunities available, and that they were not being fully recognized for their professional excellence. This was my inspiration for establishing the Ryerson chapter of Beta Gamma Sigma (BGS).

What is Beta Gamma Sigma?

Although it may sound like a fraternity or sorority, Beta Gamma Sigma (BGS) is actually an international honour society, founded in 1913, that recognizes the outstanding academic achievements of business scholars. BGS serves business programs accredited by AACSB International (Association to Advance Collegiate Schools of Business), including TRSM.

Membership in Beta Gamma Sigma is the highest recognition a student can receive in a business program accredited by AACSB International. The mission of BGS is to encourage and honour academic achievement in the study of business, cultivate and celebrate leadership and professional excellence, advance the values of the Society, and serve its lifelong members. 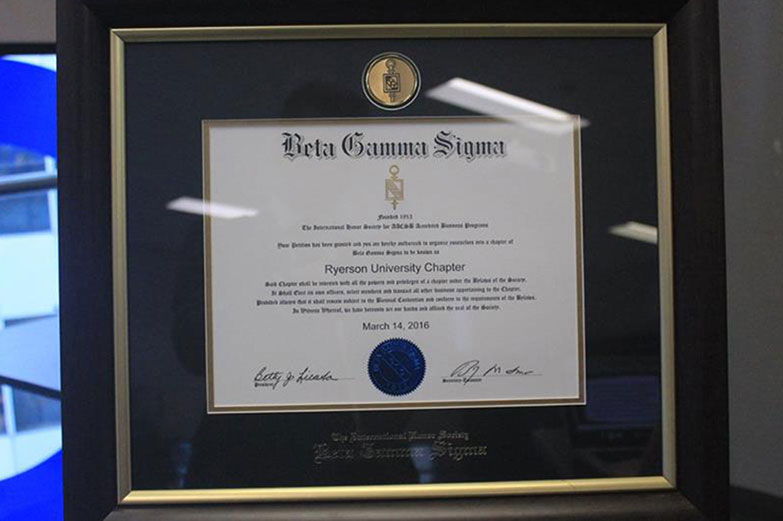 My dream of starting a group to further honour the academic achievements of TRSM students finally came true in January 2016 when the Ryerson Beta Gamma Sigma Chapter was officially established. Our chapter had its first recognition ceremony in March 2016 and its second one in October 2016. Since the first induction ceremony, the chapter has grown to over 100 members.

BGS recognizes the top 10 percent of students at TRSM in their third and fourth year classes, based on CGPA, and gives them opportunities to network, attend BGS alumni events around the world and give back to the community through various initiatives. BGS members also gain access to LinkedIn’s largest closed group, with over 60,500 existing members and a wide variety of benefits, from subscription and publication, insurance and financial benefits, test prep discounts, attire, technology offers, travel discounts and more. 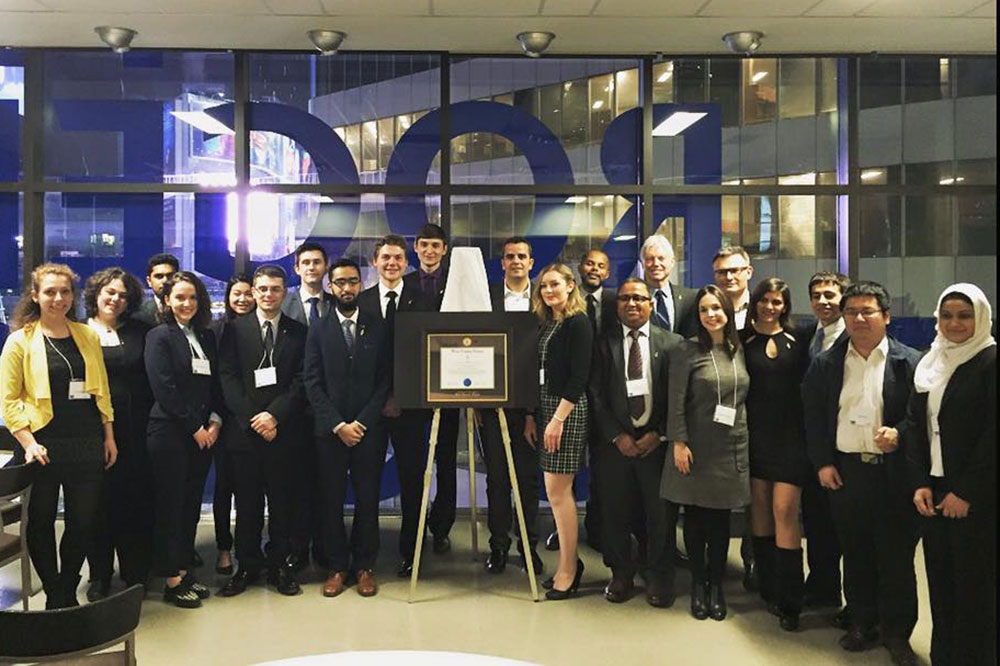 What Beta Gamma Sigma Has To Offer

Through the BGS chapter at Ryerson, I have met some of the most outstanding students and exchanged ideas with them. We were also able to send one of our executive members to Dallas, Texas, to participate in the Global Leadership Summit, where he was able to meet and network with BGS members from universities around the world, participate in lectures given by some leading industry professionals from multinational enterprises and develop his ethical leadership skills.

On the evening of February 1, we will be hosting our first ever BGS panel event. Five exceptional BGS alumni will be joining us to discuss the theme of “transitions.” We invite everyone to join us for this evening of learning followed by an opportunity to network with the speakers and BGS members.

What I have come to learn from my involvement with BGS is that leadership is an action, not a position. Leaders set direction, build an inspiring vision, and create something new. Leadership is about mapping out where you need to go to “win” as a team; it is dynamic, exciting, and inspiring. As an on-campus student leader, I have been inspired by BGS to constantly try to make an impact as a positive role model and a hard-working mentor for other students. My mission is to give high-achieving business students the opportunity to cultivate long-lasting relationships with other like-minded individuals.

Together We Can Grow TRSM

When we bring together the high academic achievers from across TRSM, we can make a real difference. We can encourage students to strive for academic success and for more involvement around campus by nurturing our greatest abilities and sharing our knowledge.

Through interacting and networking with BGS chapters at other universities throughout Canada and the US, we can grow Ryerson’s reputation and prestige. Becoming a BGS member was one of the best decisions I made during my time at TRSM, and I would encourage you to check your emails for an invitation to join this summer!

Maddalena is a 4th year TRSM student majoring in Economics & Management Science and minoring in Finance. She intends to pursue a master’s degree in economics starting in September 2017. Maddalena is an award-winning student leader and has been recognized as an active member of student life at TRSM. Her goal is to make a contribution to enhancing the quality of the undergraduate student experience at Ryerson University while adding value to Ryerson’s brand. View all posts by Maddalena Castelli