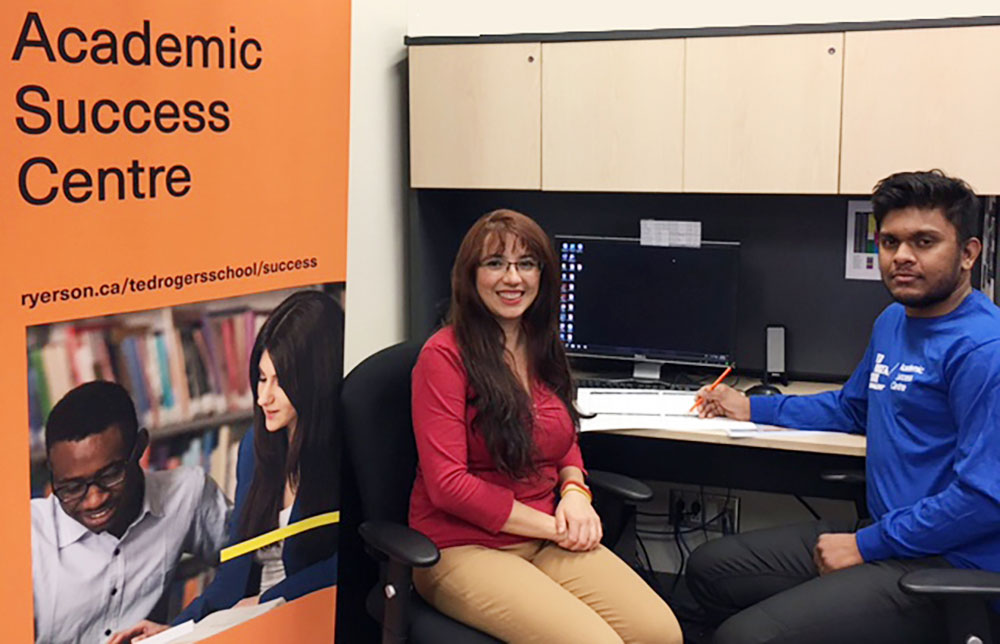 Every semester, the Academic Success Centre (ASC) witnesses the achievements of several students at TRSM, and last semester was no different.

One student who stood out for her strong determination to succeed was Ana Paula Dantas Lima.

For those of you who don’t know Ana Paula, she is a first-year mature student, studying Business Technology Management (BTM). She came to Canada as a caregiver from Brazil, then worked in a customer service field where she says she realized the future was in technology. One day while looking online, she found out about the BTM program, and decided to join the TRSM family.

As a mature student, Ana Paula felt that her hardest obstacle was managing the demands of getting back into the pace student life and tackling coursework. “The workload was unimaginable – a lot more than I expected it to be,” Ana Paula says.

That’s where the ASC came in, once Ana Paula understood she needed help to stay on track.

After meeting Joana Londoño, the ASC Learning Strategist, at a mature student event on campus, Ana Paula decided to pay a visit to the ASC and access all the help she could get.

After meeting one-on-one with Joana a few times, Ana Paula was referred to a Peer Academic Coach (PAC), who acted as a mentor and guided Ana Paula through the semester with timely advice.

When asked about her main takeaway from the supports provided by the ASC, Ana Paula says it helped her to be proactive and organized. “They guided me, they pointed the way and provided me with the resources for my success.”

Ana Paula believes that more students should take advantage of services offered by the ASC.

“If you want to get on the right track, head to the ASC. Using the services does not mean you’re less able or that there is something wrong with you. It means you’re using the tools you have at your disposal. It’s about being proactive instead of reactive during your time at TRSM, always staying ahead of the game so you don’t have to panic.”

Ana Paula is also an avid user of the Tutoring Centre and Study Groups at the ASC, as well as the Student Learning Centre (SLC) and regularly attends events around campus.

As Ana Paula says: “If you need help, ask for it – it’s your future you are playing with.”

Mathew is a 3rd year TRSM student in the School of Retail Management. He is currently the President of the Retail Students Association and one of the Retail Directors on Ted Rogers Students’ Society. Mathew’s courses are primarily retail-related with electives in French, Psychology, and Law. He is hoping to complete a Law minor. Mathew has always enjoyed helping others and is excited to be a part of the Peer Academic Coach team to be able to help students achieve their best. A fun fact about Mathew is that he is a graduate from the Biomedical Sciences program at the University of Ottawa, where he specialized in Neuroscience and Psychology. View all posts by Mathew Catangui