Take Advantage of Networking at Your Co-op Placements

“If you want to go somewhere, it is best to find someone who has already been there.” – Robert Kiyosaki

For the past 9+ months, I have worked in various co-op positions at RBC. My first co-op term was within RBC’s IT Internal Audit, which was a position I hadn’t previously considered but turned out to be a fantastic opportunity to learn and expand my network at RBC.

RBC made networking substantially easier by having their very own Ten Thousand Coffees Hub, a social media platform for RBC employees to connect and schedule coffee chats. Taking advantage of RBC’s vast network of 80,000+ employees has allowed me to grow in ways that no other employer would be able to provide. 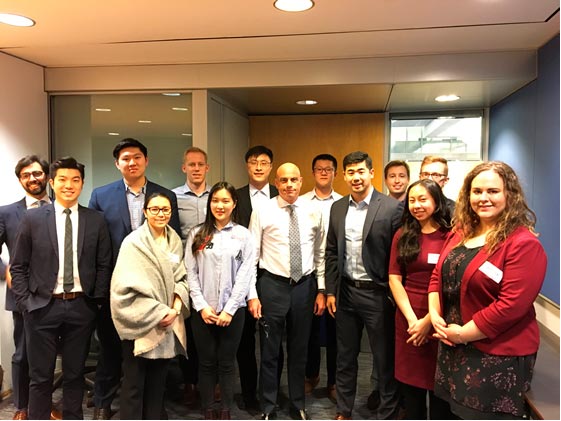 By attending all the various events hosted by Campus Recruitment I was able to create strong professional relationships with the many members of RBC Campus Recruitment. I was able to meet new people, learn from their experiences, and expand my knowledge of the various divisions within the bank. However, much of what happened next was unplanned, it was simply a result of being outgoing and taking on opportunities.

The very last group coffee chat during the Fall 2016 term was hosted by Brien Convery, Director of Campus Recruitment. It was originally scheduled during the afternoon but got bumped to early morning the following day, which ended up being a wet and gloomy December morning. Not thinking twice about the time or the weather, I eagerly attended the chat to learn about Brien’s experiences and hear his advice to co-ops. The chat progressed as usual, but the following day Brien posted an article on LinkedIn about the coffee, in which all the co-ops were personally mentioned.

Fast forward to my Winter 2017 term at RBC Capital Markets in Global Trading Client Management when I got a phone call from Campus Recruitment. I was asked to speak at the Winter Orientation due to my previous involvement in Ten Thousand Coffees immediately decided to undertake the opportunity. In addition, a few weeks earlier I was on-boarded as an RBC Student Partner and was responsible for being the lead student in recapping the Ten Thousand Coffee events that were to occur through the Winter 2017 term.

I have attended more than 50 coffee chats and went on various group and individual coffee chats during my 9+ months at RBC. At the time I was not aware of the profound impact that creating professional relationships could make. However, attending coffee chats with various colleagues at RBC has helped me secure interviews, receive return offers, and learn about the different groups at the bank. Lastly, and most importantly, I was able to create long lasting professional relationships with many different RBCers.

Want to learn more about TRSM Co-op? Visit our website.

Ryan is a 4th year co-op student at TRSM, majoring in Economics and minoring in Finance. Ryan has worked in several industries for his co-op placements including Internal Audit, Executive Compensation Consulting, and Capital Markets. Currently, Ryan is in his final co-op term at RBC Capital Markets. To date, he has completed his Canadian Securities Course and is a candidate for the Chartered Financial Analyst designation as he has passed the CFA Level I Exam. Ryan is also active in his school and community. At TRSM, he is a member of the Ryerson Investment Group. In addition, within the Ryerson Community, Ryan is part of the Jack.Org Executive Team for the Ryerson Chapter where he volunteers as the Financial Manager. Further to his passion for supporting youth mental health, he is also the Capitalize for Kids, Ryerson Lead Ambassador where he works to lead registration and fundraising efforts for the Capitalize for Kids Student Challenge.